Why do you need to double-cleanse?

We all know that the bottom-line of any daily skincare routine starts with a gentle cleanser. The underpinning idea to double cleansing is to first use a cleansing oil or something similar to get rid of your makeup and/or sunscreen so that, your regular cleanser can actually cleanse. Rather than having to battle its way through those layers of gunk first. A bit like having to hack down a lot of weeds and long grass before you can even think about getting the mower out and making bowling-green stripes. The result you’re aiming for is a thorough cleanse.

When is it a good technique to use?

Are you a wearer of heavy makeup and/or mineral-based sunscreens? If the answer to that is yes then doing it twice is for you. Because that way you get rid of both the makeup and the sunscreen. The upshot of that being a better result from the products you use post-cleansing.

A caveat: should you have oily skin then this method might help you. In particular if you think:

In such a situation two gentle cleansers are better than one harsh one. Increase the effectiveness of whatever you do by doing it with a soft cleansing brush or a soft cloth – such as the Pink&Green muslin cloths.

How to Double Cleanse

As you’d imagine, the most common double-cleansing method is to start by washing your face with an oil-based cleanser or with a cloth. Then follow that up with a skin-type-suitable cream or gel or lotion cleanser.

You should start the process with the oil-based cleanser first because that will remove the make-up and sunscreen ick from your skin. 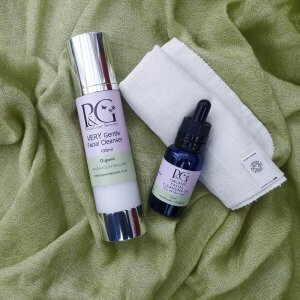